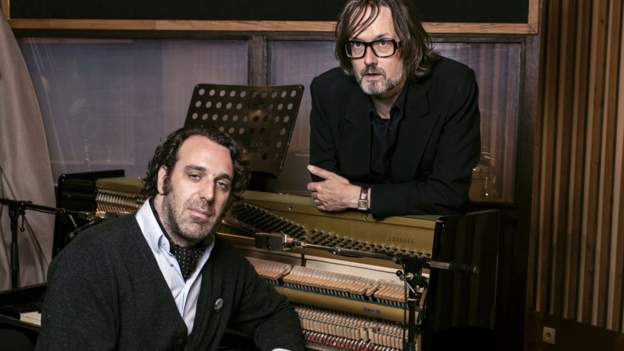 Room 29 is a collaboration between the Pulp frontman and eccentric Canadian composer, inspired by the Chateau Marmont hotel in Los Angeles.
What if a hotelroom could “sing” of the life stories and events it had witnessed? Intrigued by that question, Canadian pianist and composer Chilly Gonzales and Pulp frontman Jarvis Cover conjure up the lifes of previous occupants of Hollywood’s Chateau Hotel Marmont. Many infamous and famous guests like actress Jean Harlow or Mark Twain’s daughter Clara inhabited the hotel’s room 29. Thus, the Deutsche Grammophon album appears as a 21st-century song cycle about glittering fantasy and often bleak reality of Hollywood and at the same time as metaphor for a place within each of us, home to our deepest desires and fantasies.  In music folklore the hotel is very famous – Jim Morrison of The Doors nearly fell out of a window, Led Zeppelin’s Jon Bonham rode a motorbike through the foyer and comedy actor John Belushi died of a drug overdose in one of its ‘bungalows’.

So be careful when visiting.  Their album is due out on 17 March.

Have A Pint (and/or) Shot With Underground

Mixtape Vol II, “Waiting For The Winter” is #1 on the Indie Chart!